Agra, also known as the city of The Taj Mahal, Is a part of the huge state of Uttar Pradesh. This city is considered hopelessely romantic because of the great monument of Taj Mahals history, that graces it with its presence. City of Agra standing on the banks of river of Jamuna is famous for its delicasies on offer at Agra are a variety of cuisines to travelers besides the Mughlai cuisine, which saw its birth in this region, the city also offers a varied fare in its eating out option city is a paradise for the people with a sweet tooth. Agra is well known for the other palaces and forts that were mainly built in the Mughal era.

The city history is as varient as the people of the city itself. Agra saw the best period of regin when the city was controlled and ruled by the great Mughal Emperor Akbar. Agra became one of the principal cities for the Mughal Empire after Ibrahim Lodi died in the war of Panipat in 1526. When the then emperor Akbar choose Agra to be his capital he laid down the foundation of the Fort of Agra. After Taj this is one of the most important of building in Agra. The city of Agra is surounded by various other places of historical significance and can be visited in the day by taxis or by taking a bus. 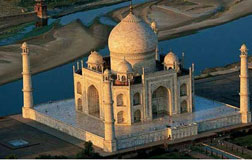 Located at the city of Agra in the State of Uttar Pradesh, the Taj Mahal is one of the most beautiful masterpieces of architecture in the world. Agra, situated about 200 km south of New Delhi, was the Capital of the Mughals (Moguls), the Muslim Emperors who ruled Northern India between the sixteenth and nineteenth centuries. The Mughals were the descendents of two of the most skilled warriors in history: the Turks and the Mongols. The Mughal dynasty reached its highest strength and fame during the reign of their early Emperors, Akbar, Jehangir, and Shah Jehan.

It was Shah Jehan who ordered the building of the Taj, in honor of his wife, Arjumand Banu who later became known as Mumtaz Mahal, the Distinguished of the Palace . Mumtaz and Shah Jehan were married in 1612 and, over the next 18 years, had 14 children together. The Empress used to accompany her husband in his military campaigns, and it was in 1630, in Burhanpur, that she gave birth to her last child, for she died in childbirth. So great was the Emperor love to his wife that he ordered the building of the most beautiful mausoleum on Earth for her.

Although it is not known for sure who planned the Taj, the name of an Indian architect of Persian descent, Ustad Ahmad Lahori, has been cited in many sources. As soon as construction began in 1630, masons, craftsmen, sculptors, and calligraphers were summoned from Persia, the Ottoman Empire, and Europe to work on the masterpiece. The site was chosen near the Capital, Agra on the southwest bank of the River Yamuna. The architectural complex is comprised of five main elements: the Darwaza or main gateway, the Bageecha or garden, the Masjid or mosque, the Naqqar Khana or rest house, and the Rauza or the Taj Mahal mausoleum. The actual Tomb is situated inside the Taj. 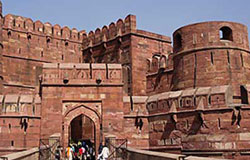 Though Agra is more famous world over as the city of Taj, Agra Fort is another dimension to the city that attracts tourists in hordes. Built by Akbar in Red Sandstone when he was through with the consolidation of his power after accession to power in 1654, Agra Fort worked both as a military strategic point as well as the royal residence. Many of the palaces inside the fort were later added by next generations of Mughal Emperors like Jahangir and Shahjahan.

Agra Fort is located on the banks of the Yamuna near the railway station. Agra is well connected by air with Khajuraho, Varanasi, and Delhi. It has good rail and bus connections with major Indian cities. From the city, there are taxis, tempos, auto-rickshaws, and cycle rickshaws to carry one to the fort. Prepaid taxis and autos from the railway station are also available. Bicycles can also be hired on hourly basis. 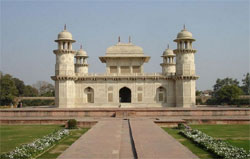 The tomb of Itimad-ud-Daulah is as interesting as the life of the person for whom it was built. Mirza Ghiyas-ud-din or Ghiyas Beg (later known as Itimad-ud-Daulah) was a poor merchant and lived in Persia (modern-day Iran). While on his way to India for business, his wife gave birth to a baby girl. As the family was extremely poor and had nothing to eat, the parents decided to abandon the child. However, the wails of the baby girl forced the parents to come back and take her with them. The baby girl brought a stroke of good luck to her parents, for Ghiyas Beg found a caravan that straightaway took him to the court of the great Mughal Emperor, Akbar. In the course of time, Ghiyas Beg rose to become a minister and a trusted treasurer in Akbar's court. After Akbar's death in 1605, his son Jahangir became the Mughal emperor, who made Ghiyas Beg his chief minister or Wazir. Ghiyas Beg was also honored with the title of Itimad-ud-Daulah or the pillar of the state.

Ghiyas Beg's daughter grew up to be a beautiful lady and came to be known as Mehr-un-Nissa or the sun of womankind. In the course of time, the fame of her beauty spread. She was married off, but she soon became a widow. She returned to the court of Jahangir where her father was employed. Emperor Jahangir fell in love with her and married her. She soon became a powerful personality in Jahangir's court and was called Nur Mahal, the light of the palace, and Nur Jahan, light of the world. When Ghiyas Beg (Itimad-ud-Daulah) died in 1622, Nur Jahan undertook the project to build his mausoleum. Later she built the tomb of her husband (in a similar style) in Lahore. Nur Jahan had a brother whose daughter was married to Jahangir's son, Shahjahan. She was known as Mumtaz Mahal in whose memory Shahjahan built the world famous Taj Mahal.

Itimad-ud-Daulah was buried in a tomb that resembles a jewel box and set in a garden. This tranquil, small, garden located on the banks of the Yamuna was to inspire the construction of the Taj Mahal in the later years. It is the first tomb in India built entirely in white marble. The tomb is also justly famous for the glorious pietra dura (stone inlay) decoration depicting cypresses, wine glasses, and an amazing variety of geometrical arabesque. The jali screens set in arched recesses are splendid. Four small minarets rise at the four corners of the small tomb structure. The whole structure gives the impression of an enlarged precious object. Due to the profusion of intricate work done on marble and the beautiful marble screen-work, the tomb easily qualifies as a veritable forerunner of the famous Taj Mahal.

The tomb of Itimad-ud-Daulah is located on the banks of the Yamuna, near the Yamuna Bridge railway station. Agra is well connected by air with Khajuraho, Varanasi, and Delhi. It has good rail and bus connections with major Indian cities. One can travel to the tomb by making use of taxi, tempo, auto-rickshaw, or cycle rickshaw. Prepaid taxis and autos from the railway station are available. Prepaid transport is also available for excursions in and around the city limits. Bicycles can also be hired on hourly basis from different parts of the city. 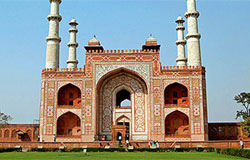 The Mughal Emperor Akbar, known as Akbar the Great, ruled an empire that stretched across North India from 1556 to 1605. His reign is considered the pinnacle of Mughal rule in India.

Akbar's tomb is located in the serene ambience of Sikandra 3 km away from Agra. Akbar began building it during his lifetime and his son, the Mughal Emperor Jahangir, completed it. Some of its design features are similar to the design of the Taj Mahal built later in Agra. Akbar's tomb at Sikandra has a large arched entrance and green lawns, on which deer can be seen grazing, surround the tomb.

Built in the Indo-Saracenic style, Akbar's tomb at Sikandra is a peaceful setting for a ruler who led an eventful life. Akbar came to the throne aged 13, following the death of his father Humayun. The serene resting place of the great Mughal ruler Akbar, at Sikandra, is a site that invites you to step back into history and contemplate the life and times of Akbar the Great.

Sikandara is located very close to Agra and can be easily covered in a short duration, as part of your Agra Tour

The heritage site of Fatehpur Sikri is located 40 kilometers from Agra India. You can see this magnificent city with its amazing monuments of red sandstone and marble, built by the Mughal Emperor Akbar the Great, on tours to Agra with our Travel-Agents.

According to legend, the Emperor Akbar, though he had many wives, did not have an heir. He went on a pilgrimage to Sheikh Salim Chisti, a Sufi saint who lived near Agra and sought his blessings. Akbar was blessed with an heir, who he named Salim, after the saint, in gratitude. (Salim later inherited the throne as the Mughal Emperor Jahangir).

The beautiful monuments at Fatehpur Sikri are a synthesis of Islamic and Hindu architecture reflecting the religious tolerance of Akbar. Akbar also founded a syncretic religion called Din-i-Illahi, which inspired some of the buildings at Fatehpur Sikri. The city of Fatehpur Sikri was built as a sign of the Emperor Akbar's gratitude to Sheikh Salim Chisti. Work on the city started in 1571 and was completed 15 years later. We takes you on tours to Agra which include the historic destination of Fatehpur Sikri.

Some of the grand structures at Fatehpur Sikri include the Panch Mahal, the Buland Darwaza, the tomb of Salim Chisti, the Jama Masjid Mosque and the life-size chessboard where courtiers could play the role of pieces. The architectural beauty of the monuments of Fatehpur Sikri have led to its being declared a World Heritage Site. Fatehpur Sikri is considered to be one of the finest examples of Mughal architecture in India.

The city of Fatehpur Sikri was abandoned shortly after Akbar's death because the lack of water made it difficult to sustain the city. The newly built city was deserted and remains in a pristine state, with the beautiful carvings and latticework on the buildings retained in their original state of preservation. 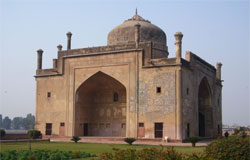 Built in 1635, Chini-ka-Rauza is situated just a Kilometer North to the famous Itmad-ud-Daula on the same side of Yamuna but is in dire straits due to negligence. Though it does not match the charm of Itmad-ud-daula, its importance as being the only pure Persian architecture in India, makes it worth preserving.

Parts of the walls are still covered with the colored enamel tiles that once enhanced the whole of the exterior and gave the tomb its name, while traces of paintings and Islamic calligraphy can still be made out on the high domed ceiling. On the top of the chamber are inscribed some Quranic verses. Although it is in a dilapidated condition, but still its craftsmanship is worth seeing.

The mosque at Sikri was the first structure to be built in 1571. The exterior is modest but the interior carries the most gorgeous ornamentation in the floral arabesques and ingenious geometrical patterns in brown, red, turquoise, black and white. The spacious courtyard adds a stately charm to the place. It could accommodate ten thousand men at prayer. Akbar was so enthusiastic about this mosque that he occasionally swept the floor and gave azan (call for prayer). On June 26, 1579, Akbar even read the khutba himself, a great innovation, earlier attempted only the Timur and Mirza Ulugh Beg.